It’s has big open world to explore, it has great concept of Greek mythological, it has great ways to telling the story. Yes, we’re talking about Assassins creed Odyssey. It’s been a while since assassins creed odyssey game has released and man, it’s still look pretty awesome own it’s way of presenting great visuals and great Picturisation quality with in the odyssey.

I’m personally a great fan of Assassins creed series and it’s literally pretty awesome and interesting game indeed. The storyline, presentation of the odyssey on various events like in Origins, different stories, different potential of the game there is no way you can ignore these series’s for sure.

I like how the game still grasps every single tiny bit of environmental activity which the city everyone is just doing their stuff and roaming around like the city is alive on its fullest. After all the combat is also feels great by the time you just fight one person and you wanna grab another enemies then you can just go and attack the, with even any fault. In many cases, I sometimes notice something that the player just hit the walls, that feels really irritating but it’s just getting more better by the time the game is becoming more good and better by the time.

The visuals here are the reason people love to play these kinda game. Assassins Creed odyssey gives you fullest course of 4k HDR to play the game and it’s just literally looks damn good. Every time I just taking screenshots and so to feed on social media. I mostly enjoyed the game roaming around before having any missions, that’s my way of playing, it’s just enjoying at its full to the end I love roaming around here and there and diving into water, water feels like the person it’s literally in the water, it’s feels so realistic. The game has done its best for the visuals, that’s for sure.

Telling about storyline, well, without any spoilers I would say story is good while you enjoy doing the missions rather even thinking about story, of course story is way good and missions related are really engaging. Because of the story you will get you thumbs and eyes peeled into your game for many hours and you won’t even notice it.

In my opinion the game is good, its best graphics will make you play even longer time and make you take screenshots every time you visit any scenario. Every colours and every drop of water feels so much realistic, I wanted the game to be more longer but it’s kinda good but yeah game has better combat, better straight forward storyline just makes even more better. If you haven’t play this game or if you have, then tell us down in the comment box what did you liked the most about Assassins creed odyssey. 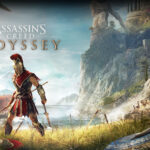