It’s been a while since E. dragon arrived at COC. and we were curious to see a new troop in the COC. Here is everything you need to know about the newly COC troop called Dragon Rider.

The Dragon Rider is unlocked in Townhall 13, with the elixir cost of 6000000 with 11 days of built time. After the upgrade of barracks, the barracks will have a dragon head design that gonna look stunning.

Dragon Rider is a defence targeting troop with 25 housing space. So it’s in the middle in between dragon at 20 and E dragon at 30. In comparison between the regular dragon, Dragon Rider and E. dragon.

In comparison, Dragon Rider has more of a hit point and damage compared to both the Dragons, but Dragon Rider can attack a single target at a time whereas E. dragon forms a chain of attack which make E dragon more vicious in the attack.

There is one thing that needed to note that, since it’s targeting defence buildings, the Dragon Riders won’t fight back to any clan castle troops or any skeleton traps on its own. You need to add some of the troops to defend the dragon rider to make them work effectively. And since it’s mainly made for defence targeting, the dragon riders are not effective towards the clan castle troops or enemies heroes. The single targeting pattern in the dragon Rider going to be an issue for a defensive purpose.

Mainly dragon riders attacking patterns is more like a little bit away from defensive buildings nearly 3 tiles range. This will lead the balloons to venerable and maybe minions too. Grand Warden on the other hand will be at the back due to his long-range attacking ability on the battlefield.

Secondly, after death damage, due to its longer-range attacks the Dragon Riders cannot damage the buildings it’s attacking. The dragon rider can damage other buildings under its range and deal 900 of damage after death.

Other troops will be available for an upgrade, they mainly are aerial troops and the addition of new super troop rocket balloons.

Shadow of the tomb rider – 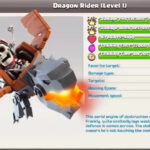 Dragon Rider all basic poins and reviews in COC attacks and indivisual defence.