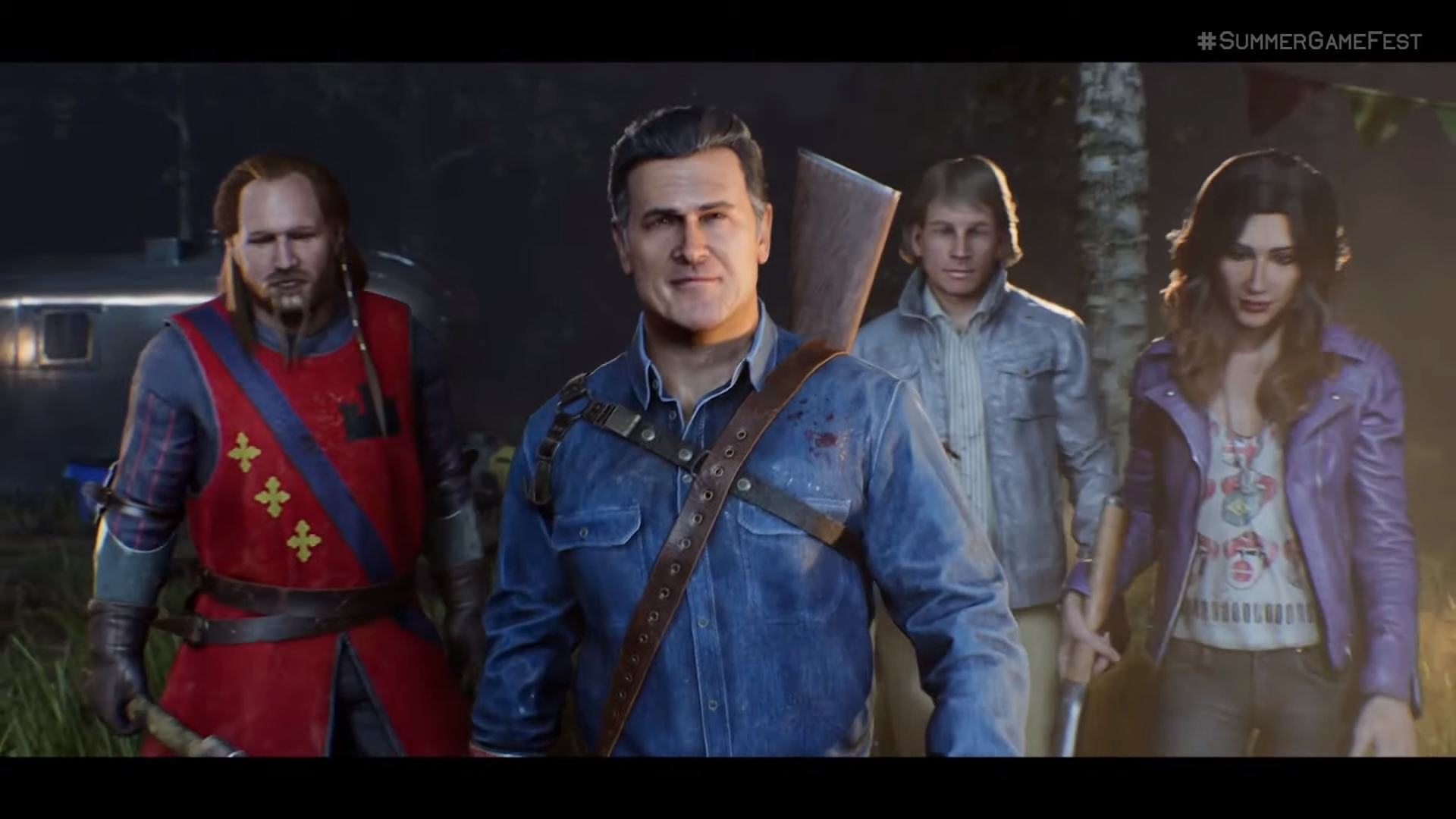 Zombie games just like zombies themselves sometimes just will not die but despite a lot of people thinking the zombie concepts played out there’s actually quite a few cool zombie themed games dropping in 2021 that look really promising we’ve got about 5, so let’s break them all down.

This game this was revealed at last year’s game awards and it’s developed by sabre interactive and published by boss team games saber interactive has been making games for many years of varying degrees sometimes ports sometimes games but this seems like something entirely different for them from what we know so far this looks to be like more of an arena based evil dead style game with cooperative pve stuff and pvp gameplay involving all the characters from the evil dead universe and blasting some creatures.

Apparently, there is going to be a skill tree involved and multiple weapons and gadgets that you can use not to mention the fact that they have bruce campbell as ash that’s the most important thing but we also see characters from throughout the movies.

Even ash vs evil dead which is just a welcome surprise but there was a time when we had a lot more evil dead games out there and maybe we took it for granted still we’re very happy to finally get a new Zombie game, even if it’s more of an arena-based multiplayer thing it could still be a lot of fun.

You’ve probably seen this one floating around on social media I think we’ve highlighted it in the past essentially this is seemingly early in the works we might see an early access version of it this year.

Apparently it’s from a small developer still seeking funding but essentially it’s a really intense weird gross and ambitious first person zombie shooter we’ve got some gameplay and some concept footage that seems like it is indicative of the game and you can immediately see why I said ambitious because like the gore and dismemberment stuff. They have going on here is really crazy.

I’m curious to see what else this game is gonna do to stand out other than just some cool gore and some first person shooting it needs more than that but a lot of people have jumped on board and are into the idea so even though we’re only looking at tiny glimpses of ideas of the game we’re hoping that we see it big in 2021.

Way to be dead

I’ll be honest this one on the list seems like one of the games that still looks a little rough but the idea is pretty cool. It’s an asymmetrical multiplayer game with deep horror elements and essentially takes place in a zombie infested hospital and you play as either one crazy infected doctor multiple patients and even maybe even turn into zombies themselves that’s what the game seems to be implying and that seems like it could be the best element just from some of the early glimpses.

We’ve seen with some of the animations and some of the gore but I’d say more than anything with this game even though the four versus one horror ideas we’ve seen before and we’ve even seen playing as the creatures before the atmospheric effects they have going on in this game seem pretty cool reminds me of the old days of resident evil and silent hill.

Apparently it’s going to be extremely limited you can only carry and use one item at a time to make things more stressful but apparently there’s going to be some sort of progression with updating your abilities in game this is going to be environmental interactions that might help with certain things and you’re going to be able to customize a bunch of different variations for the maps which seems like it could be fun for some experimentation.

I’d say definitely this is a game for people who are into dead by daylight it is from a small developer but we think we’re gonna see it in 2021 we just wanted to put something on this list and in front of your eyes that maybe you wouldn’t have stumbled across otherwise.

Now despite the generic sounding name this seems like a cool enough concept if not a little bit derivative essentially it’s pve and pvp, where you’re fighting in a post-apocalyptic world for resources against other people while also trying to escort some survivors to safety there’s loot there’s crafting there are survival elements and lots of other players to worry about. The pve elements hordes and hordes of zombies and cool creatures, I mean technically in this game they’re not really zombies they’re like people that have been taken over by meddling with nanotechnology.

Its like they were getting lost in the weeds but if you look at it at face value it seems like zombies right so we’re counting it especially because it seems like an interesting fun third person shooter now it is worth mentioning that it is being published by games giant Tencent maybe this is their answer to something like division they want to crack into that pve pvp market I don’t know for sure but the game does look pretty with ray tracing and a bunch of nvidia support and we’re expecting to see it in some form in 2021.

Which is a new game from the developers behind arizona sunshine and essentially it looks like they’re taking VR zombie blasting to the next level. We see a lot of chaotic cool action we see some kind of over-the-top wild weapons including a wrist mounted launcher.

It is multiplayer focused and takes place in los angeles 20 years after the apocalypse but with a cool ice theme and generally just an art style that to me kind of reminds me of borderlands a little bit just considering that arizona sunshine was one of the cooler zombie shooters made for VR that just really made a big splash.

We’re really excited to see what the developer publisher vertigo games can do with a bigger budget more eyes on them and more ideas and now we talk about VR games a lot here at game ranks but we know that they’re still not super duper mainstream or anything like that but we got to give credit to arizona sunshine the previous game from these developers of course that game was incredibly successful with not only just the blasting but the platforms.

The level of support the high quality nature of the game. So, after the fall can really take it to the next level but I am curious to see how it fares as a multiplayer title that’s something that’s a little bit trickier to nail down with VR. Admittedly might sometimes have an even smaller audience because what we’ve seen so far just looks like a lot of fun and it’s releasing apparently early 2021.