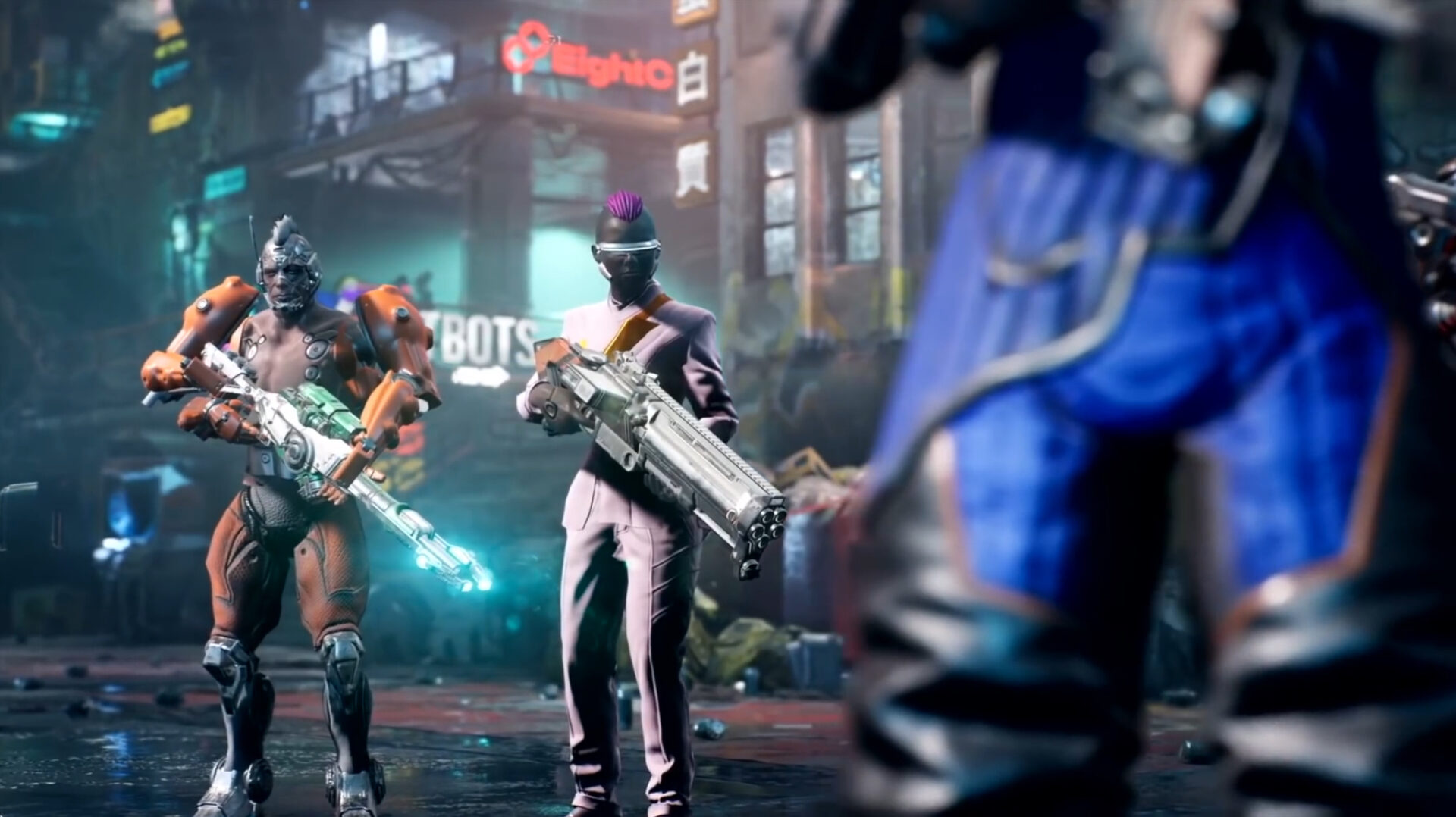 A co-op action shooter RPG set in a cyberpunk world called Veles. Basically, if you can imagine a twin-stick shooter combined with an action-RPG, maybe a little bit of “Diablo” combined with maybe “Enter the Gungeon” a bit, maybe a little “Shakedown: Hawaii,” but it’s all in 3D. This is the kind of game that I think we’re actually missing sorely ’cause it’s kind of a mid-tier AA-type game.

It gives me “Oddworld: Abe’s Odyssey” vibes for whatever reason, while also being obviously a completely different type of game. Still, to me, it looks extremely intriguing. I haven’t been able to actually play it myself. However, everything I’ve seen of it gives it the vibe that it’d be the type of thing that you kinda get the type of action-RPG you could always want and so much more.

I love twin-stick shooters. They are fun as hell. It also seems like you can play it solo or in co-op. I have a feeling that it’s a ton of fun either way. The action looks totally packed, frenetic, and exciting for up to four players, and I’m really excited the player when it lands on PC, Xbox One, and Xbox Series X on July 29th.

It is a really unique-looking kind of parkour stylized game with bullet time, and I really enjoy not only the art style, but just sort of the gameplay style that is put forward. If you have been able to play the demo on Steam, it is a pleasure.

I would highly recommend it because we do have a couple of weeks before this game comes out. To call it unique would be an understatement because it uses momentum in such a, just a good way, that I think if you do play that demo, you’re gonna be sold on it.

It’s not just coming to PC, though. It is also landing on Nintendo Switch, which is where I think I’m gonna be purchasing it personally because it also seems like a game that would work really good on the run.

I feel like it might be a good one to be playing as I’m out and about. In any case, “Boomerang X” is coming to Nintendo Switch and PC on July 8th.

Which is a packaging of two adventures following the rookie lawyer, Ryonosuke. See, the interesting thing about this game is it features the ancestor of the actual protagonists as the main “Ace Attorney” games, Phoenix Wright, and is set in 19th-century Japan, as well as England.

Like I said, it’s a double pack. There is two games in “The Ace Attorney Chronicles,” each of them featuring five different episodes that are obviously set in a different era, but also are, I mean, they’re “Ace Attorney: games. They’re silly, as well as dramatic and wild. If you’re unfamiliar, this is basically the biggest series of evidence gathering, case building, and courtroom drama that exists on any platform.

It has been the source of just countless memes. People use “Ace Attorney” stuff as reaction gifs everywhere, just because it’s so ubiquitous, and well, because they’re so fun and full of personality. “The Great Ace Attorney Chronicles” is also gonna be multi-platform. You’re gonna be able to get it on PC, on Switch, and on PS4 on July 27th.

The very latest in the a long-running F1 series. I mean, this series has gone on for a very long time. EA used to publish way back in the day. This is actually the first time they’re involved in quite a while, I think since 2002, 2003, if I remember right. Basically, you play through a campaign with a bunch of fictional drivers
who are playing obviously real cars in a real career mode. There’s various features, like team events.

Research has been completely simplified. There used to be a really complicated tree system that they just abandoned and put something much less dumb in its place, in my opinion. I don’t know exactly how that’s going to play out over time, but from everything I’ve read about it, it seems like an obviously superior mode that works out to be less strange, confusing, and tedious, frankly.

They’ve also done a lot of improvement on multiplayer. Apparently, they’re claiming that they’ve split up the multiplayer lobbies in a way that will serve both beginners and experienced racers much better. It’s not gonna drop as many people into areas where their skill level isn’t matched. And there’s also gonna be a lot more customization options than the previous game, which of you recall, “F1 2020” was actually pretty well received, and they’ve actually pretty aggressively added a lot of stuff to this game, all things considered. I think that’s great.